Sunny was always a dog who was easily scared. I don’t mean that she was always cowering in the corner. I just mean that even while she was in her “fearless” puppy years, confidently walking down the street on a leash, if a plastic bag blew in the wind just a bit too close to her, she would jump and run in the opposite direction. Sunny would get startled by sound of the doorbell in a Domino’s pizza commercial. She never ran up to play with other dogs and she never went up to make friends with any person who was not in the core family. Whenever I would go down to her level to calm her down, she would jump on me, climb on to my shoulder and just perch there for safety. Despite the slight fear, Sunny was still a happy dog. She just always wanted to be by someone’s side. I just figured it was normal. She was my first dog but I figured if people have different personalities, why not dogs, right? So I never tried to correct her from being weary of strangers or of plastic bags that blew too closely to her.

Once Sunny turned 1-year old, she developed ulcers on her eyes due to allergies. Yes, allergies. Not only is Sunny skiddish, she is also allergic to grass. Who knew that was possible? Well, the itchy allergies made her instinctively scratch at her eyes, causing ulcers. So for most of her life, Sunny had some sort of vision issues but was still able to see well enough. And maybe that’s what helped her to find herself when she ultimately lost her sight. Sunny’s vision worsened with time due to dry eyes and pressure build up which is apparently typical in dogs with bulgy eyes like Lhasa Apsos. One of the scariest moments for me and my husband was when the vet said we would have to either remove her eyes or remove her lenses due to the pressure in her eyes not stabilizing. This was despite the numerous eye drops she had to receive 3 times a day. Sunny was clearly in pain. It hurt us just to see how red and bulgy her eyes were. And she constantly pawed at her eyes from the discomfort. It was just a waiting game for the vet. So when Sunny’s lenses dropped, we decided to have them removed in an effort to save what little sight she had left. 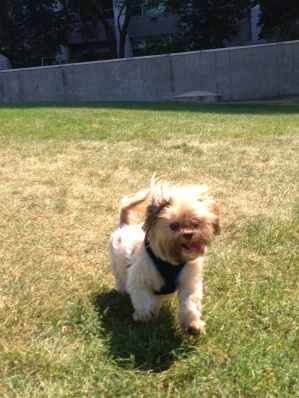 Sunny running pain free after having her lenses removed.

I’m glad we saved her bit of vision. For the first time in a long time, our dog was energetic, seemingly happy, more confident and pain free. The vet always said her lack of energy was probably due to age or even her diabetes but, looking back, I think it was due to her discomfort. During that year of pain free life, Sunny’s vision did eventually go completely. I can’t say exactly when it did because she acted so normally and navigated through the house so well, but after a few follow-up visits with the vet, it was confirmed that she was completely blind. I remember that day because we were complaining at how Sunny seemed to be scavenging more and more and the vet told us it was typical dog behavior. Humph! My dog was far from typical. She never went through the garbage or laundry or go for scraps on the floor, but now? Now she was fearless and always searching for something. We actually had to purchase one of those stainless steal garbage cans that open based on a hand sensor at the top of the lid to keep our dog from going through the garbage. And even that didn’t stop her! She hasn’t succeeded in getting to the trash in the new garbage can, but this small blind dog has succeeded in dragging it across the kitchen to the dining room in an attempt to knock it over.

A year after Sunny’s lenses were removed, the pressures in her eyes built up again and her eyes did eventually have to get removed. The were removed a year apart. Her right eye was removed in March 2014 and while the recovery was hard on all of us, Sunny was obviously the first one to get over the ordeal. Nothing stopped her. She still ran around and even played whenever other dogs in the park sniffed around and wanted to play. The only issue was that after loosing their scent, she stopped chasing/playing with them. 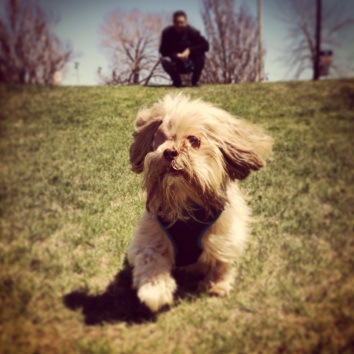 Sunny 1-month after her first enucleation.

In March of 2015 Sunny had her left eye removed. Alex and I were a bit more prepared this time and recovery was that much more quicker. Ever since she went blind, we started taking Sunny to the groomers more regularly because it was too difficult for me to trim her hair around  her face and eyes. She used to be scared but even after going blind and have her eyes removed, she does great. Sunny is more trusting and confident. 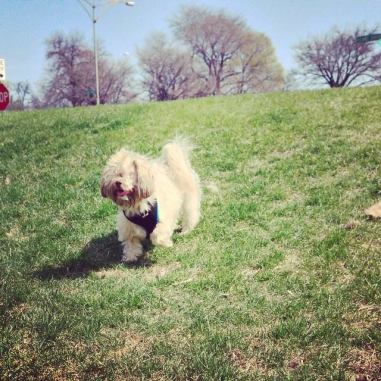 Sunny 1-month after her second enucleation 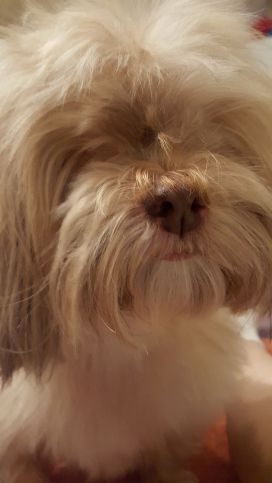 Sunny is 13 years old and fearless now. She definitely lets her nose lead her more now being blind than she ever allowed before as a sighted dog. She can be in another room entirely and somehow know that we just started to peel a banana and out she runs to find us, turning corners perfectly as if she was sighted. She walks like she’s a sighted dog and we even get stopped when people realize she doesn’t have eyes. Some think she was born without eyes. Sunny found herself in the dark. She truly did. Whatever pain she was enduring, once it was alleviated, freed her to stand tall again. Losing her sight forced her to trust her other instincts. She follows her nose like dogs should…like she’s never done before. And she’s thriving now like I didn’t think possible. Whenever I think I can’t endure one more thing, I look at this blind diabetic dog who walks with confidence, with a joy in her step and endless happiness and I think to myself – “If Sunny can make it through that enduring pain and those surgeries, then I can definitely endure whatever comes my way.” Sometimes Sunny is how I find my strength and how I find love to push me through.

2 thoughts on “Finding herself in darkness: How going blind allowed Sunny to follow her instincts”

Finding strength and love when living with…